Parts to assemble the robot have been delivered. Custom parts were being milled, turned, welded and laser cut. Prefab parts had been ordered and were eagerly awaited. The very first system we were able to assemble was the drivetrain. Initially, this seemed to go smoothly, but upon test driving it, some errors became very clear. We had forgotten to use Loctite and lock nuts on the wheel bolts, and a circlip was improperly installed. Therefore, the vibration caused a wheel to loosen enough to fly off! After the initially shocked gasps and joking accusations, we quickly set about remedying the problem.

After we have ensured that everything was properly secured. We realized that the stability wasn’t as good as we’d like Next to that, the front of the drivetrain wouldn’t fit under the load-station. We established more stability by removing the center-drop. The center-drop wasn’t needed anymore. Thanks to the Omni-wheels at the back, we are able to turn easy. The drivetrains front were swapped from one end to the other. Due to this, the gearboxes were raised. Which were too close to the load station when trying to get a hatch. This was solved by ‘padding’ the new front with some POM.

The laser cut parts came in after we had the drivetrain assembled. This gave us one very clear task. Filing. The edges of the metal were very sharp and not at all safe, so every laser-cut part needed its edges filed off. After many hours, all the parts were safe, and we could use them in assembly. Starting off with the horizontal displacement. For the horizontal displacement, we also used some sliding tracks from the FIRST starter kit, some pneumatic pistons, and some springs. 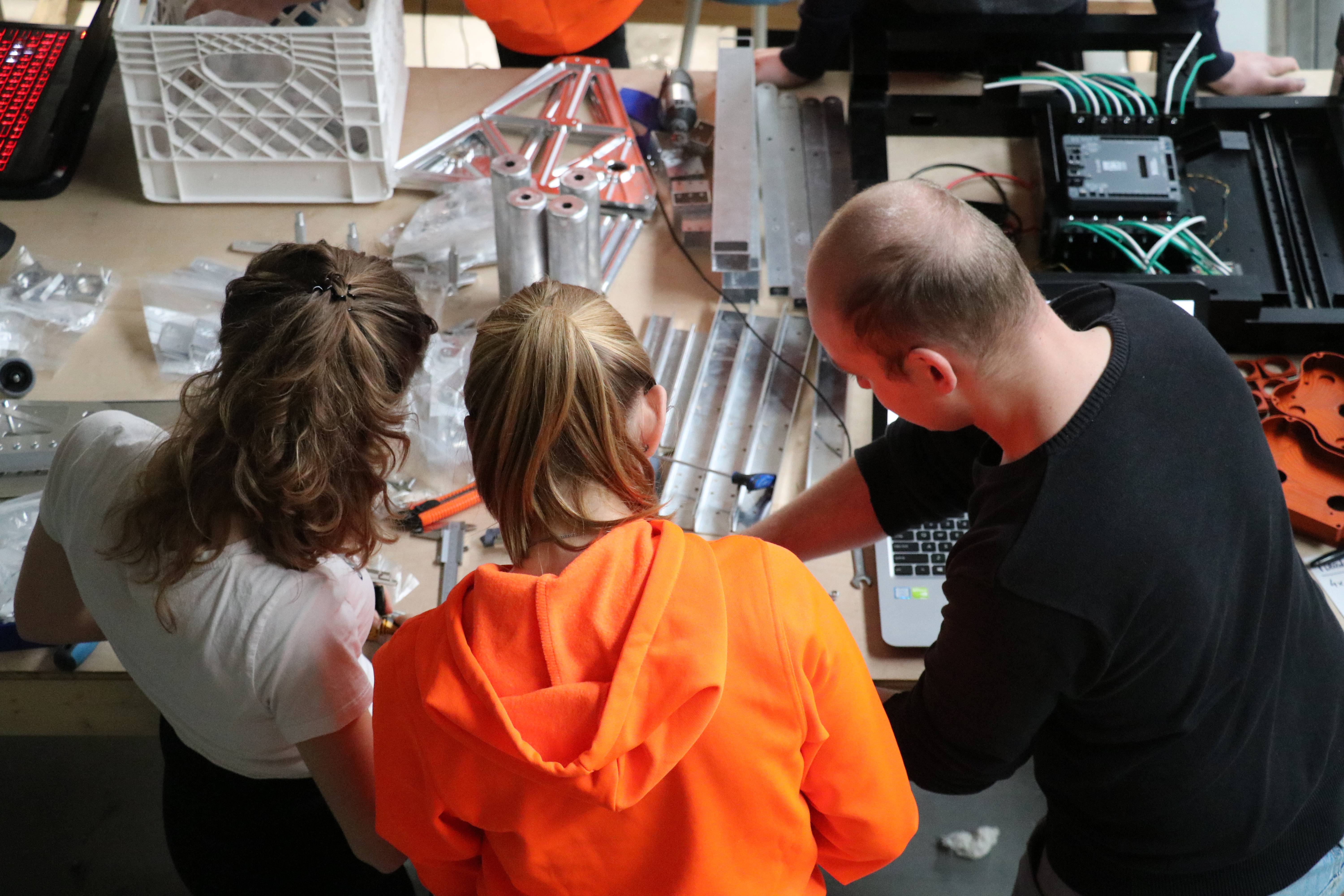 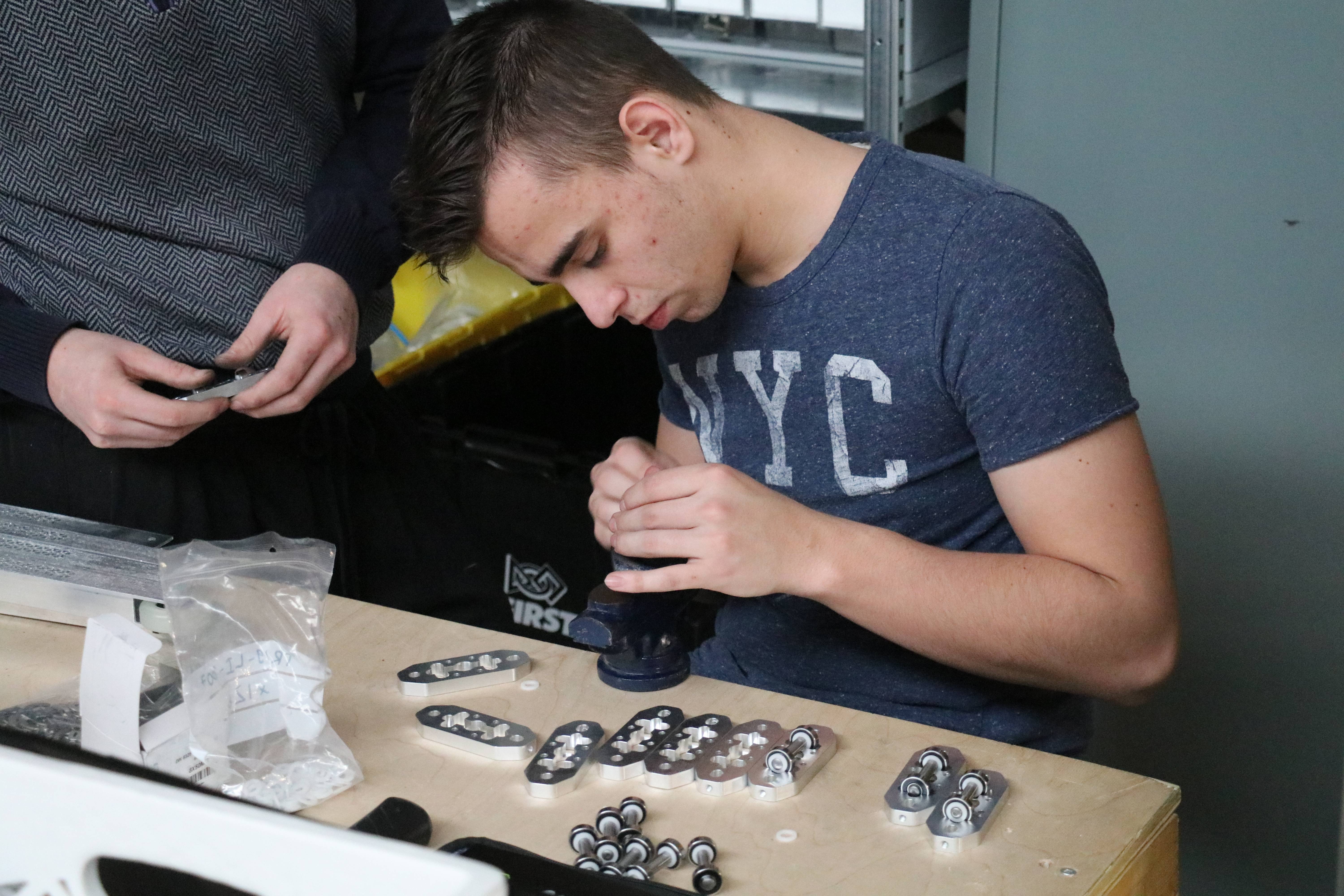 Following this, the welded parts for the lift were delivered. Two of the milled parts to attach the lift to the drivetrain were slightly too big to fit into the beam. They needed to be shaved down with an angle grinder before being hammered into place. Care was taken to not attach the 3 level-1 parts at the top until we were sure they were straight. We also could not screw the lift supports into the drivetrain as holes had not been drilled for this.
When the full lift was assembled, the carrier suddenly got stuck in the bottom. At first, the bearing blocks were suspected to be faulty, but then a rogue bolt was found in the U-beam, jamming the system. The bolt was easily removed, and the horizontal displacement was attached to the carrier.

With the lift assembled we were able to attach the climbing arms to it. Upon the first assembly, it was found that one arm lock worked, while the other didn’t. We knew that the arm wasn’t moving down far enough for the lock to hold it. However, we could not find any obvious differences that would cause this and chalked it up to a combination of the tolerances. To remedy this, we placed a plate under the locking mechanism of the offending arm to raise it. It was then found that the springs that pulled the arms upright were too strong, to the point they bent the lift beams when operating. These springs have been removed and weaker ones put in their place. The bend has since been fixed.
Unfortunately, due to late delivery, we have not yet been able to assemble the lifts gearbox. However, as soon as we get that delivery, we will be able to fully assemble the robot to begin testing and tweaking. 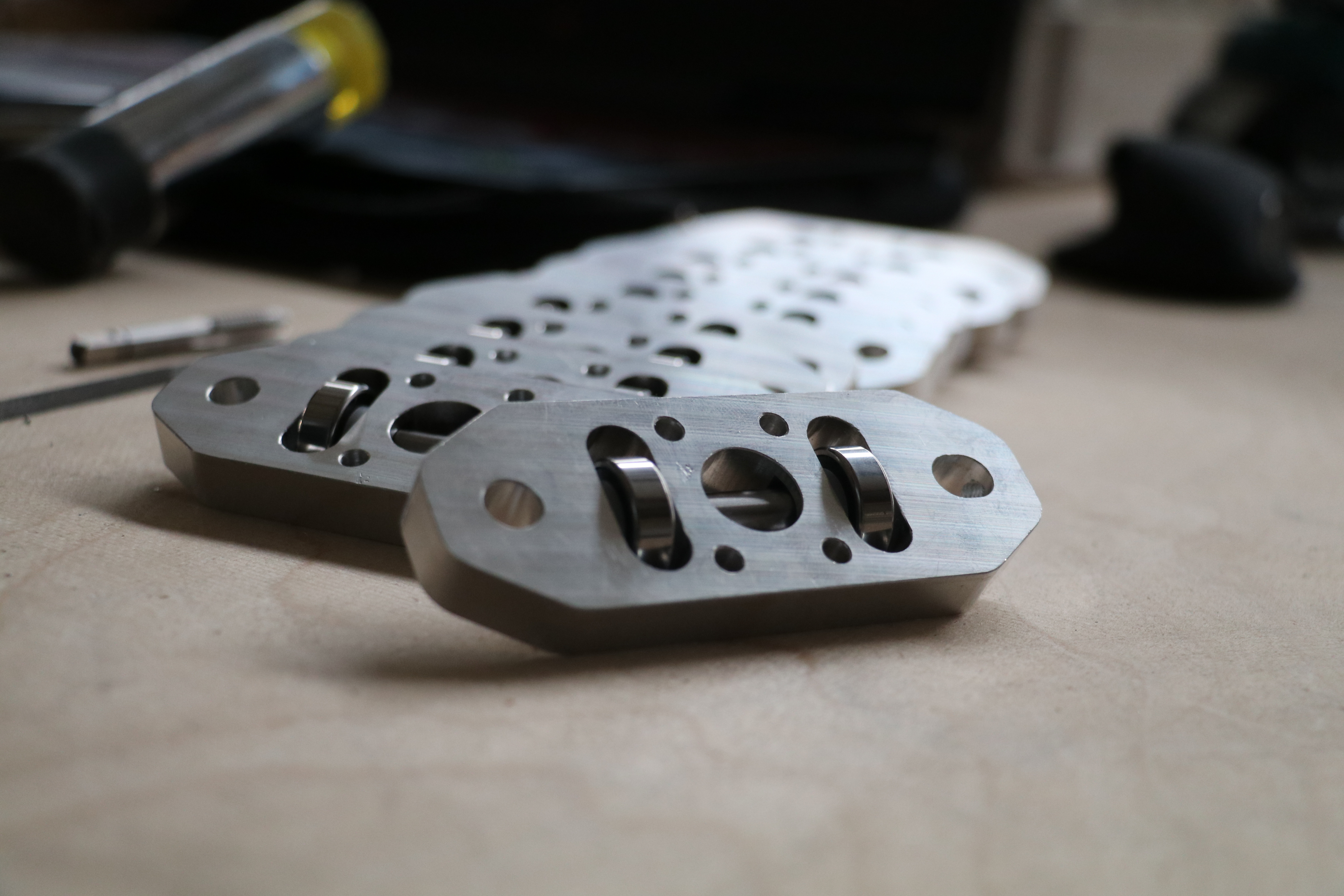 Make sure to subscribe to the Fontysblogs to make sure you never miss a blog.

Follow us also on our social media so you don’t miss something:

Rembrandts STEAM Foundation is a Dutch Non-Profit organization that started as the First native Dutch robotics team, also known as Team Rembrandts. Team Rembrandts, team 4481, is a robotics team located in Eindhoven with students from Fontys University of Applied Science, Zwijsen College and Heerbeeck College. HBO, WO, MBO and High school combined all together.

We will be present at the open day of Fontys Engineering in Eindhoven. Join us the 15th of October and see what we do!

We are a team of motivated students and professionals that are working together to discover new solutions for robotic systems, with a passion for Industry 4.0. We compete in some of the worlds most advanced robotics competitions to challenge ourselves, push forward innovation and meet like minded individuals. We share our knowledge with companies to help them automate and bring the fourth industrial revolution to those who like it.

Rembrandts STEAM Foundation is a Dutch Non-Profit organization that started as the First native Dutch robotics team, also known as Team Rembrandts. Team Rembrandts, team 4481, is a robotics team located in Eindhoven with students from Fontys University of Applied Science, Zwijsen College and Heerbeeck College. HBO, WO, MBO and High school combined all together.